BC Environment is poised to endorse a new laboratory method for measurement of in vitro bioaccessibility of lead and arsenic in soils, which may have important ramifications for environmental remediation requirements and costs for the mining and resource extraction industry.

Many numerical soil standards for the protection of human health are derived from risk-based evaluations of the potential for toxic effects due to incidental soil ingestion, often focused on impacts to small children. Exposure assessments generally assume presence of the most easily absorbed forms of toxins, but for exposures due to soil ingestion, this may sometimes predict overly conservative exposure scenarios. Site-specific measures of bioaccessibility can be applied in Human Health Risk Assessments (HHRAs) to derive science-based estimates of safe levels of toxins based on realistic exposure models of soil ingestion.

Bioavailability is the fraction of an ingested contaminant that is absorbed by the body and transferred across membranes, which becomes available for distribution to internal target tissues and organs, potentially causing health effects (US EPA, 2007). Absolute bioavailability is the absorbed dose of toxicant divided by the administered dose in a toxicity study. Direct measurement of bioavailability from soil-borne contaminants requires in vivo studies where test animals are fed controlled amounts of soils prior to being euthanized for measurement of uptake to blood, tissues, and target organs.

Because of the challenge, expense, and ethical objections with in vivo studies, laboratory-based in vitro tests have been developed to measure bioaccessibility. “In vitro” is Latin for “within the glass”, meaning conducted in a test tube or culture dish. In vitro bioaccessibility (IVBA) refers to the fraction of the total amount of the contaminant in a soil sample that dissolves in a simulated gastrointestinal fluid (US EPA 2007). IVBA represents the fraction that is potentially available for absorption, and can be used as a surrogate for bioavailability.

The useful outcome of an IVBA test is a measure of Relative Bioavailability (RBA), which can be directly applied within Human Health Risk Assessments. RBA is defined as the absorbed fraction of a toxin from soil ingestion divided by the absorbed fraction from the dosing medium in relevant Toxicity Reference Value (TRV) studies. RBA values can be calculated directly from IVBA test measures, but only after the specific IVBA test has been extensively validated through an in vitro/in vivo comparison study. The IVBA method proposed for use in BC is US EPA Method 1340, which has demonstrated strong predictive relationships between IVBA and RBA for arsenic and lead from varied soil types and elemental species (US EPA, 2007), as shown below:

The EPA 1340 IVBA method has been validated by several BC laboratories (including ALS) in two interlaboratory studies. The method measures in vitro bioaccessibility by extracting a one gram soil sample for one hour using a glycine-buffered hydrochloric acid solution (pH 1.5) at 37°C, which simulates the gastric fluid and digestion conditions within the human stomach.  Prior to extraction, soils are dried, disaggregated, and sieved; only the <150 µm fraction is assessed. This represents the soil fraction that tends to adhere to human hands, considered to best represent the ingested fraction. After extraction, the leachate is filtered (0.45 µm) prior to analysis for lead and/or arsenic by ICPMS or ICPOES.

In order to calculate IVBA, strong acid leachable metals must also be measured in the sample using the BC SALM method, which must also use the <150 µm fraction.

Bioavailability can be affected by the chemical species and forms of elemental contaminants, by soil characteristics such as particle size, TOC, and pH, and by the physical forms of contaminants at a site.

Sulfides and elemental forms of lead and arsenic are generally less bioavailable than carbonate or oxide forms. Metals often bind to fine clay minerals due to their high surface areas and cation exchange sites; some complexes are weakly adsorbed, and may desorb as a function of pH, but weathered or aged complexes can exhibit lower bioavailability, and may not desorb in gastric fluids. Arsenic in aged and weathered acidic soils (< pH 6) with high iron oxide content tends to have lower bioavailability. For lead, high TOC and basic soils correlate with higher bioavailability.

The physical forms of metal contaminants also affect RBA. For example, most contaminants from mining and mineral processing tailings and wastes tend to be bound within soil minerals, whereas metals deposited to soils from wastes in dissolved forms or from atmospheric emissions tend to be more easily liberated.

IVBA testing of mining wastes can be useful for risk assessments

The ALS Vancouver laboratory now offers testing services for lead and arsenic by US EPA Method 1340, in compliance with proposed BC ENV guidance. Sampling requirements are shown below. 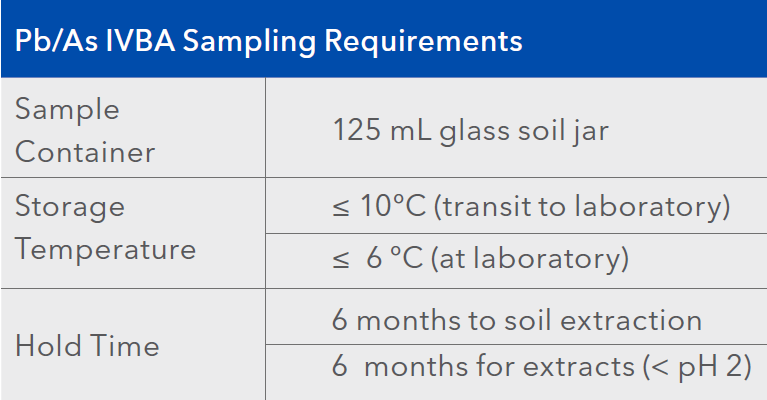 BC ENV (2021). In Vitro Bioaccessibility (IVBA) for Arsenic and Lead in Soil – Prescriptive, BC Environmental Laboratory Manual (Draft), Nov 30, 2021.