The measurement of total arsenic concentrations is generally adequate for environmental compliance monitoring, but knowledge of discrete inorganic and organic arsenic species concentrations is crucial to understanding true toxicity and health risks to humans and aquatic or terrestrial organisms. Humans are exposed to arsenic in many ways, including occupational exposure (e.g. smelting, mining), drinking water, and food sources, but the toxicity of different arsenic species and sources varies greatly. 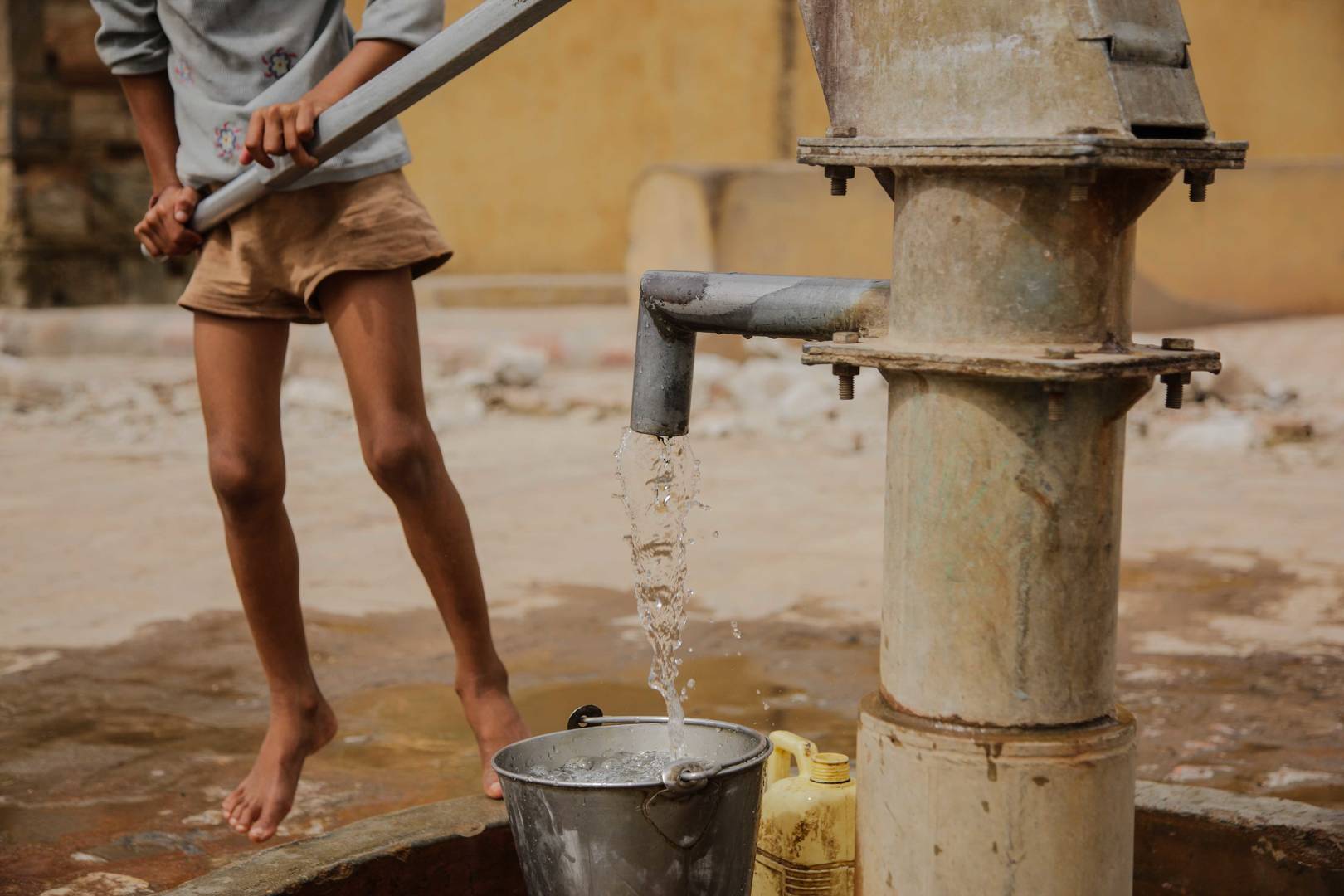 27 NOV 2019 ALS Global
Arsenic (As) is a common element in the earth’s crust, and is ubiquitous in our natural environment. The inorganic arsenic species As[III] (arsenite) and As[V] (arsenate) are confirmed human carcinogens, and can cause many acute and chronic health problems, including skin lesions, cancers, heart disease, diabetes, developmental problems, etc. Inorganic arsenic is considered by the World Health Organization (WHO) to be one of the world’s top ten chemical threats to global public health, primarily due to exposure from contaminated drinking water. The WHO, Health Canada, and the US EPA have all established a maximum acceptable concentration for arsenic in drinking water of 10 ug/L. Globally, drinking water supplies for an estimated 140 million people exceed this limit (most notably in Bangladesh, but also including groundwater-sourced drinking waters in some areas of Canada, the USA, and Mexico).

Why are the Species of Arsenic Important?

Traditionally, most environmental or human health monitoring of arsenic has focused on the total concentration of all arsenic species; however, arsenic occurs in many forms, each with widely differing toxicity. The inorganic arsenic species As[III] and As[V] are by far the most toxic, and As[III] is about ten times more toxic than As[V] to mammals. Arsenate (As[V]) is the predominant form in most oxygenated waters. Two of the most common organoarsenic species are the methylated metabolites of inorganic arsenic, monomethylarsonic acid (MMA) and dimethylarsinic acid (DMA), which are each at least 10-20 times less toxic than As[III]. Two other common organoarsenicals are arsenobetaine and arsenocholine, which are found in seafoods and seaweeds, and which are essentially non-toxic. Knowing the type and concentrations of arsenic species in a potential exposure source is crucial to understanding its potential toxicity. 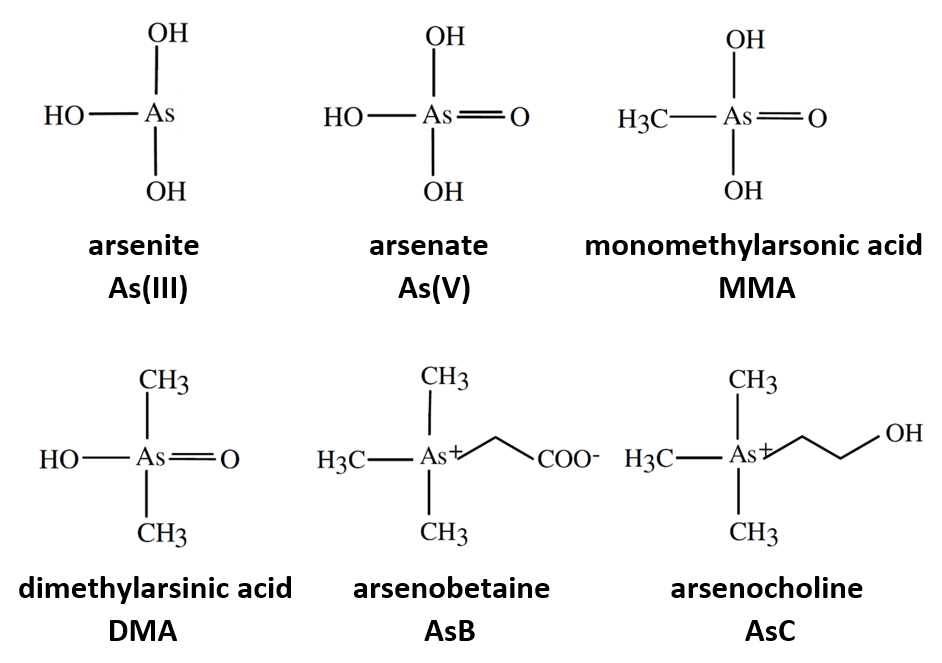 Most food sources that contain arsenic (e.g. fish, shellfish, meat, dairy, cereals) contain mainly organoarsenicals of low toxicity; rice can be an exception, and can sometimes contain higher levels of As[III] and As[V], likely due to the use of irrigation water containing high levels of inorganic arsenic. For most of the population, rice, apple juice, wine and cigarettes are the principal sources of inorganic arsenic exposure. Vegetables and fish are the principal sources of organic arsenic exposure, which is readily excreted by the body.

Monitoring of human exposures to arsenic (e.g. workplace exposures or exposure from food or drinking water) is normally conducted using arsenic speciation analysis of urine samples. The recommended measure for occupational exposure to toxic arsenic is the Biological Exposure Index (BEI), which is the sum of inorganic arsenic and its metabolites in urine. A maximum BEI of 35 ug/L is recommended for end-of-workweek urine samples (American Conference of Governmental Industrial Hygienists, 2001).

Arsenic in Drinking Water is a Global Concern

Analytical methods for the measurement of arsenic species are challenging. Extraction techniques must be carefully optimized and controlled to minimize inter-species conversions. The ALS Canada arsenic speciation methods follow recognized guidance from expert Canadian and US regulatory and governmental organizations. LC-ICPMS is the predominant test method for arsenic speciation, due to its extremely high sensitivity and selectivity from interferences. Refer to Figure 2 for an LC-ICPMS chromatogram of the six prevalent and commonly measured arsenic species.

Refer to the table below for details regarding sample collection and preservation requirements, and for the specific arsenic speciation tests currently offered by ALS Canada’s Vancouver laboratory. Biota or food samples should be frozen prior to submission if possible. Water samples are field filtered and field preserved with EDTA/acetic acid (provided by ALS) to protect against species conversions. Urine samples are collected in specimen cups (subjects of testing should refrain from eating seafood for at least two days prior to sample collection). Water and urine samples should be chilled to ≤ 10°C during transit to the lab. ALS Vancouver holds 17025 accreditation for all the arsenic species listed in the table below, for food, urine, and water. Please consult our CALA scope of accreditation for current details. 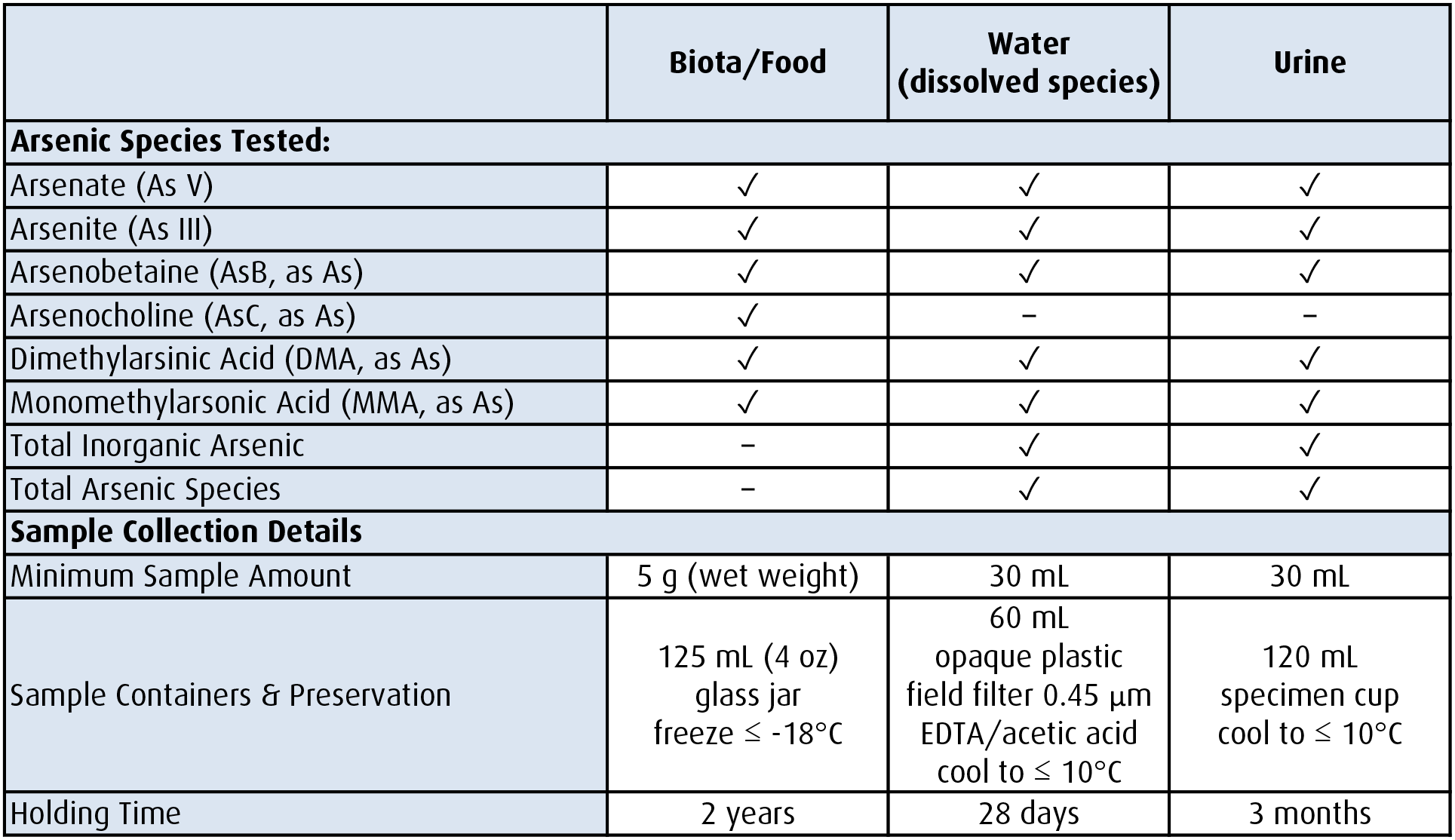