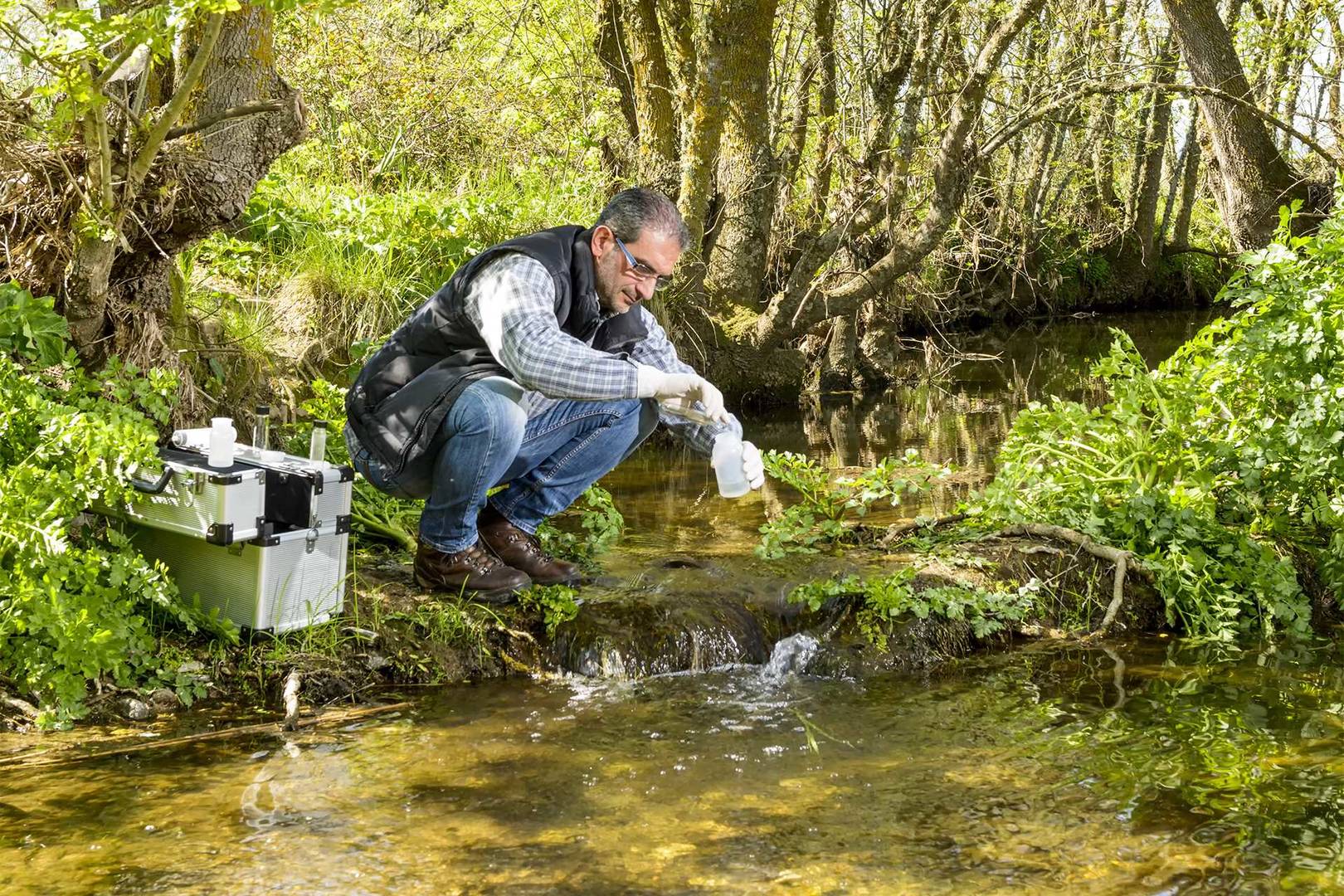 Triple Quadrupole Inductively Coupled Plasma Mass Spectrometry, also known as “triple quad” or QQQ-ICPMS, is among the most advanced technologies available for metals analysis today, offering significantly lower detection limits for most elements versus Collision/Reaction Cell (CRC) ICPMS, and providing powerful new solutions to difficult interferences, such as the well-known interference of Molybdenum on Cadmium, an analytical challenge that affects many mining industry samples, potentially causing Cadmium false positives if not understood or identified.

A Solution to Challenging Interference Problems

The key technological advancement with triple quad ICPMS is the additional quadrupole placed between the sample introduction interface and the Collision/Reaction Cell (CRC), which gives very selective control over the ions that enter the reaction cell, down to single mass unit resolution. This permits the use of highly reactive gases such as oxygen and ammonia, which are far better at removing interferences in comparison to hydrogen on standard CRC-ICPMS. Reaction gases may be selected either to change the mass of an interfering substance, or to change the mass of the target element to an interference-free mass (mass-shifting). These techniques can eliminate interferences that cannot be fully addressed with standard CRC-ICPMS.

Ultra-trace Cadmium (Cd) analysis has always been challenging by CRCICPMS due to the interference caused by Molybdenum (Mo), which can cause Cd false positives even at moderate Mo concentrations as low as ~10-40 μg/L. Cadmium has eight isotopes but only 111Cd is suitable for routine ICPMS analysis, due to its lack of isobaric interferences (i.e. isotopes of other elements with the same mass). But in the presence of Mo, Cd analysis by CRC-ICPMS is severely compromised by interference from Molybdenum Oxide (95Mo16O⁺), a polyatomic ion which interferes with 111Cd (same mass).

Triple Quadrupole ICPMS solves this problem by reacting the interfering 95Mo16O⁺ ion (111 amu) with oxygen to form a new ion 95Mo16O2⁺ (127 amu). Cadmium does not react with oxygen, so remains at mass 111, but 95Mo16O2⁺ is rejected by the final set of quadrupoles. QQQ-ICPMS is the only ICPMS technology that can virtually eliminate this interference to permit reliable ultra-trace Cadmium analysis in the presence of Molybdenum. Figure 1 illustrates the mechanics of how QQQ-ICPMS resolves this interference.

Figure 2 compares the degrees of false positives observed for the Mo/Cd interference by QQQ-ICPMS (at far right) versus CRC-ICPMS (the predominant ICPMS technology in current use in Canada), and versus legacy ICPMS instruments (introduced 1983 – but largely obsolete today for environmental analysis). 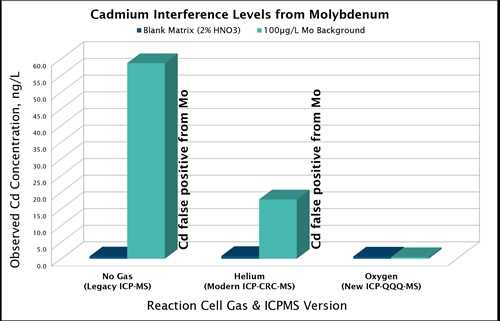 Triple quad ICPMS has now replaced High Resolution ICPMS for ALS Canada’s lowest level ultra-trace metals testing services, providing even lower detection limits and Limits of Reporting (LORs) for many of the most environmentally important elements such as Arsenic, Cadmium, Chromium, Iron, Lithium, Nickel, Selenium, and Silver. Table 1 presents our new ultra-trace level LORs for metals in pristine waters, achievable only by triple quad ICPMS. Coupled with over three decades of expertise in ultra-trace sample preparation techniques, the unparalleled sensitivity and selectivity of triple quad ICPMS launches ALS to the next level of elemental analysis, and complements our existing CRC-ICPMS testing services.

The ALS Canada ultra-trace metals package by triple quad ICPMS is intended and suitable only for pristine water samples. Samples for Dissolved Metals must be field-filtered (now a regulatory requirement in British Columbia). The ultra-trace LORs in Table 1 cannot be achieved for Total Metals in samples that require digestion. Where ultra-trace analysis for Total Metals is required, ALS recommends concurrent testing for turbidity; metals tested in unfiltered waters with turbidity < 1 NTU may be considered as “Total Metals” without digestion. If turbidity exceeds 1 NTU, test results may be biased low, and cannot be considered as Total Metals for regulatory purposes. Total Metals for this test are reported under the Analyte Group “Total Metals (Undigested)”. 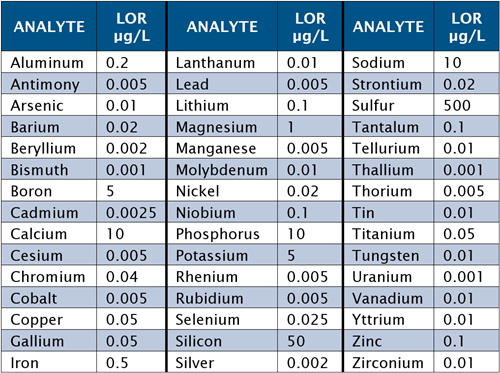 The use of suitable sampling equipment and supplies is a crucial component of quality assurance for the testing of ultra-trace metals. ALS has conducted extensive testing to identify suitable sampling supplies, including sample containers and other sampling materials such as gloves, syringes, and syringe filters, which we offer to our clients by request.

QQQ-ICPMS analysis of ultra-trace metals at the LORs listed in Table 1 is provided by the ALS Vancouver laboratory, but samples for this test may be submitted to any ALS Canada location or depot. For further information about the use of QQQ-ICPMS to resolve Cd/Mo interference or false positive issues, please contact the specialty metals group directly at the ALS Vancouver laboratory (Trace Metals Manager or Client Service Manager).