Environmental monitoring for sulfide and hydrogen sulfide (H2S) in ambient waters and wastewaters is important due to the extreme toxicity to aquatic organisms of dissolved H2S and due to human health risks from exposure to toxic H2S gas. 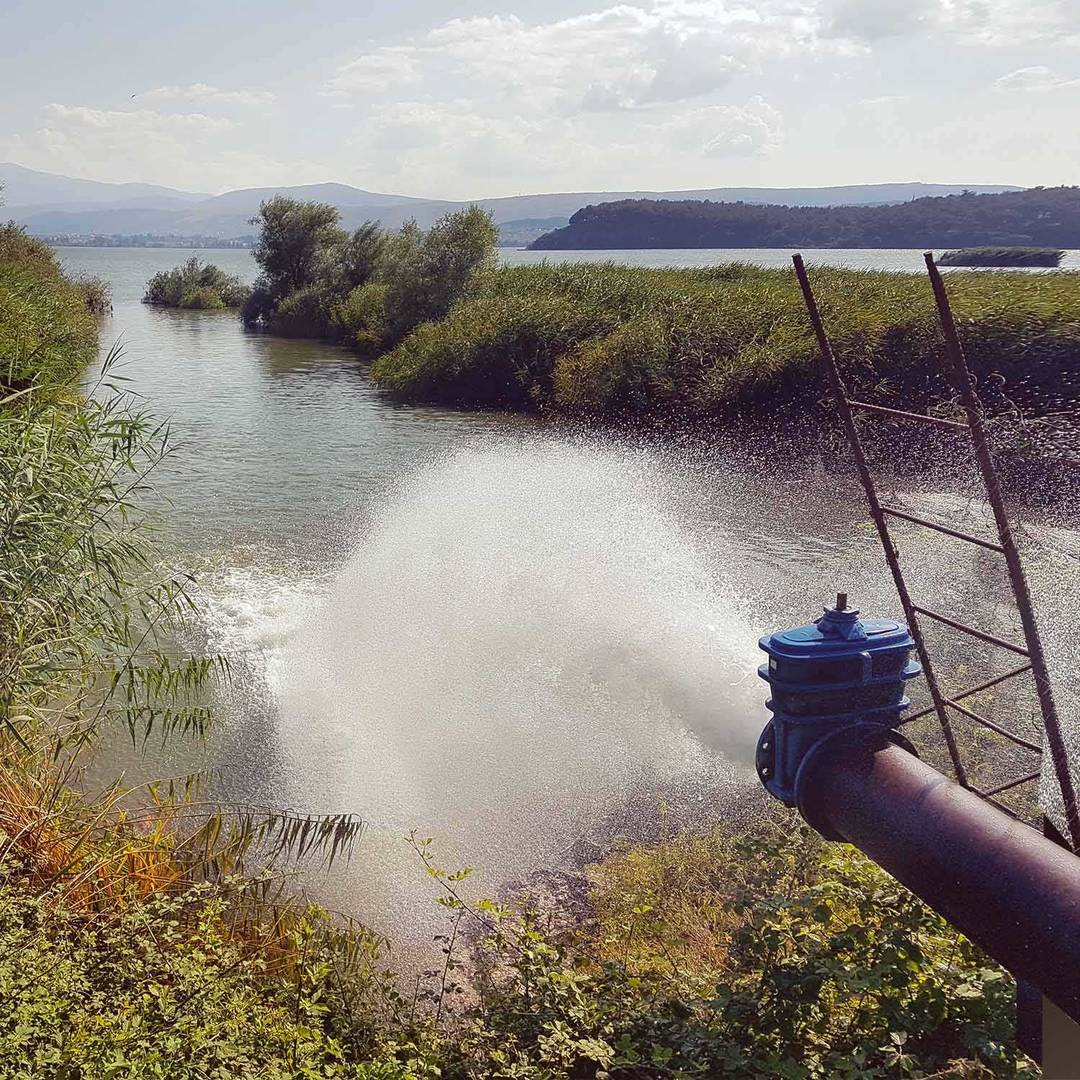 Introduction to Sulfide and H2S Monitoring

Sulfide is a reduced form of sulfur which occurs naturally through anaerobic bacterial reduction of sulfate, organic sulfur compounds, or elemental sulfur, typically through the decomposition of organic matter.  It is associated with wastes from many industries, including petroleum refineries (sour gas), paper mills, landfills, food processing plants, and wastewater treatment plants.

In natural waters, sulfide exists either as the bisulfide (HS-) anion or as dissolved hydrogen sulfide.  In water, the two species exist at equilibrium, with their relative concentrations controlled primarily by pH.  For both aquatic organisms and humans, toxic effects are due entirely to hydrogen sulfide; the bisulfide ion is essentially non-toxic.  Laboratory analysis for either HS- or H2S requires testing for both forms together (as sulfide), after which the proportions of hydrogen sulfide and bisulfide can be calculated.

The US EPA has determined that H2S concentrations in excess of 2.0 µg/L constitute a long-term hazard to many fish and aquatic wildlife, particularly fish eggs and fry, which are highly susceptible to H2S (US EPA 1986).  Most Canadian provinces have also adopted aquatic life standards or guidelines at 2.0 µg/L, including BC, Alberta, Saskatchewan, Ontario, and the Atlantic provinces.

Ninety-six-hour LC50 values for H2S with freshwater fish range from ~20-50 µg/L, but levels as low as 2 µg/L can cause stress or disease.  Marine aquatic species tend to be somewhat more tolerant, with LC50 values ranging from ~50-500 µg/L.

Challenges and Tips for Sulfide Sampling

Two factors associated with the physical and chemical properties of sulfide species introduce significant challenges for effective field sampling.  The first factor is the volatility of hydrogen sulfide; since H2S is a dissolved gas, it is highly volatile, with a boiling point of -60°C, and is subject to rapid off-gassing.  The second factor is that reduced sulfur species such as HS- and H2S are unstable and reactive, especially in the presence of oxygen.  Water that contains sulfide is usually anoxic, and the physical process of sample collection unavoidably exposes the sample to oxygen, which can cause rapid oxidation of sulfide species to sulfate (SO42-).

Three procedural rules should be followed to avoid sulfide degradation, either by off-gassing of H2S or by oxidation.  First: Minimize sample aeration and agitation during sample collection to reduce oxidation and entrainment of oxygen in the sample and to minimize off-gassing of H2S.  Second: Always use the field flocculation procedure when sampling for dissolved sulfide; avoid filtration, which can cause significant losses due to oxidation. Third: Always preserve samples in the field at time of collection (preferably immediately, but no more than 15 minutes after sampling).  If both total and dissolved samples are collected for the same sample, preserve the total sample before beginning the flocculation procedure for the dissolved portion.

For measurement of dissolved sulfide, flocculation must be conducted in the field immediately after sampling, using an aluminum hydroxide flocculant, prepared using aluminum chloride(aq) and sodium hydroxide. ALS provides a field flocculation kit containing all necessary reagents and supplies.  Sample and reagents are added to the clear 300 mL bottle provided, and the bottle is capped with zero headspace to isolate from oxygen.  Flocculation takes ~5-15 minutes, or up to 25 minutes for non-turbid samples.  Once the floc has settled to about the bottom third of the bottle, ~60 mL of clear supernatant is carefully decanted into a pre-charged sulfide sample container.  ALS provides detailed written instructions with each kit. 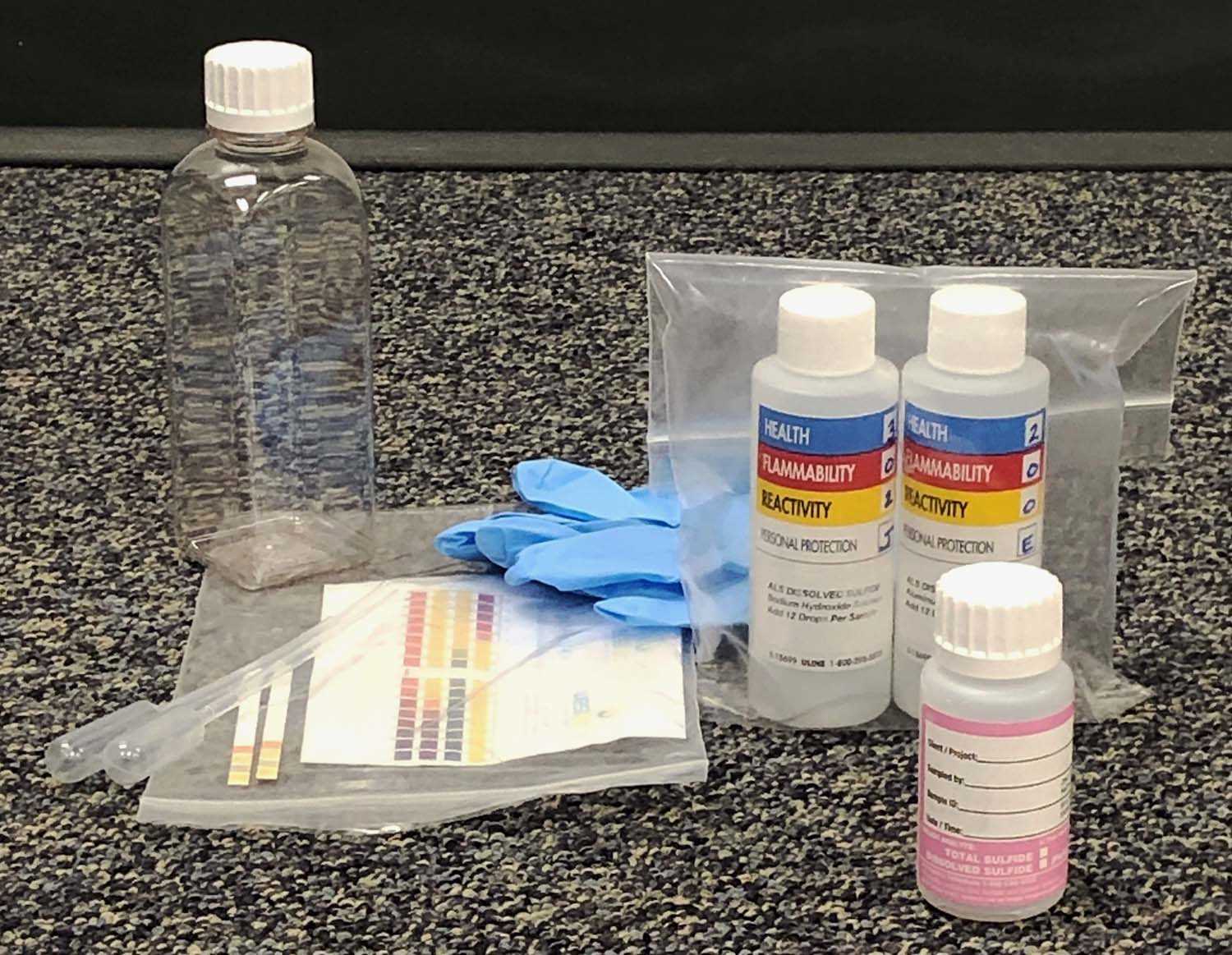 ALS provides pre-charged 60 mL containers for sulfide sample collection.  Enough preservative is provided to stabilize up to 250 mg/L of sulfide as ZnS.  Higher concentrations are still stabilized to anionic forms due to basic pH but may be less protected from oxidation than lower concentration samples.  Preserved samples (< 250 mg/L sulfide) are stable for at least the recommended 7-day hold time.

Aqueous Species and Distributions of Sulfide

Understanding the various forms and species of sulfide that exist in waters is important so that the most appropriate analytical tests can be selected.

Total Sulfide includes the bisulfide ion (HS-), hydrogen sulfide (H2S), which exists as a dissolved gas in water at concentrations up to 4,000 mg/L, and any acid-volatile metallic sulfides that may be present in particulate matter.  In natural waters (< pH 11), the concentration of the sulfide ion (S2-) is negligible.

Dissolved Sulfide includes only the bisulfide ion and hydrogen sulfide.  Sulfides associated with particulate matter are removed through flocculation, which must be conducted in the field at time of sampling.

Hydrogen Sulfide (H2S) Calculation.  The concentration of dissolved H2S in water is not measured directly but can be calculated from dissolved sulfide test results as a function of field pH, field temperature, and ionic strength, which is approximated from conductivity (field or lab).  Within this relationship, pH exerts by far the most effect, with temperature next.  Effects due to ionic strength are only significant for large changes (e.g., freshwater vs. estuarine or marine).  The calculation provides the percent distribution of dissolved sulfide represented by each of HS- and H2S (APHA 2011).  The laboratory can apply this distribution to the dissolved sulfide concentration, with an additional multiplier of 34/32 (the molecular weight ratio of H2S/S) to convert concentration units from "as S" to "as H2S."  Figure 2 illustrates H2S and HS- distribution as a function of pH for a sample at 10°C with conductivity of 500 µS/cm. 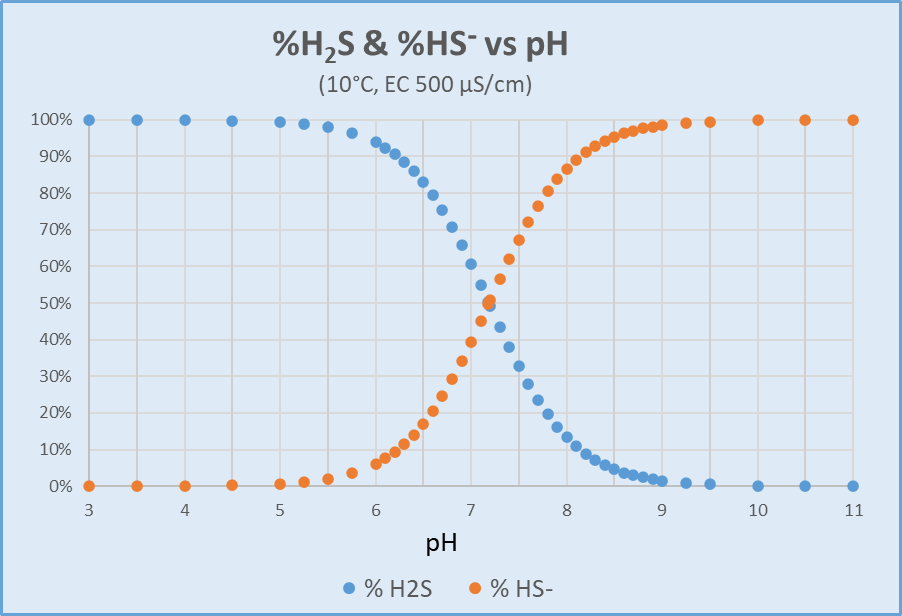 Distribution of H2S and HS- versus pH

Approximation of H2S from Total Sulfide.  Because H2S is a dissolved gas, the most accurate measure for H2S requires the use of dissolved sulfide for the distribution calculation.  However, H2S can also be approximated with the same calculation but using total sulfide; however, this calculation may be high-biased if a significant concentration of particulate sulfide is present in the sample.  H2S calculations from total sulfide are conservative, and this approach is recognized as valid for compliance purposes by many regulators (e.g., BC ENV, AEP).

ALS Canada offers calculations of H2S from either dissolved or total sulfide.  Use of the total sulfide calculation avoids the need for field flocculation but may be biased high; this approach is well-suited to initial screening tests, or to sites where sulfide is unlikely to be a contaminant of concern.

Most laboratory analysis for sulfide in water uses the methylene blue colourimetric method, based on the reaction of sulfide, ferric chloride, and dimethyl-p-phenylenediamine to produce methylene blue dye.  The amount of methylene blue produced is quantified photometrically by absorbance at 660 nm.

The simplest methylene blue method measures colour directly within a water sample using a spectrophotometer; however, this method suffers from many interferences, causing either false positives or false negatives.  Sulfite, thiosulfate, iodide, and many other soluble substances can interfere with the colour reaction, causing false negatives.  Colour or turbidity in samples can cause either false positives or negatives.

ALS Canada utilizes a highly sensitive automated test method for sulfide that separates H2S from the aqueous sample matrix using gas exchange across a dialysis membrane.  This technique is relatively free from interferences, because hydrogen sulfide from the sample is physically separated from interferences in the water sample prior to measurement by methylene blue colourimetry.  The ALS method also utilizes ascorbic acid to minimize oxidation of sulfide during the analysis, ensuring optimal data quality.  The ALS method for sulfide can achieve a Limit of Reporting (LOR) of 1.5 µg/L, facilitating its use for evaluation of the lowest Canadian aquatic life standards and the US EPA Recommended Water Quality Criteria.

ALS Canada test options and sampling details are summarized below in Tables 1 and 2.

Due to potential human health hazards from exposure to H2S gas, ALS requires notification prior to submission of any samples known or suspected to contain high levels of sulfide (> 100 mg/L).  Simple test strips are commercially available for estimation of aqueous H2S levels in the field.  ALS Canada cannot accept samples with sulfide concentration exceeding 1,000 mg/L for any testing (unless pre-diluted by customers to ≤ 100 mg/L prior to submission).  Additional charges may be applied to accommodate safe handling of high-level sulfide samples.

Please contact your ALS Canada Project Manager for more information or to arrange for sampling containers or field flocculation kits.