Industry experts in the environmental and mining fields are aware that the chemistry and analysis of cyanide are complex. This Enviromail explains some of the technical challenges involved with cyanide analysis, and provides environmental practitioners with insight into factors which can avoid potential data quality issues such as false positives or false negatives. 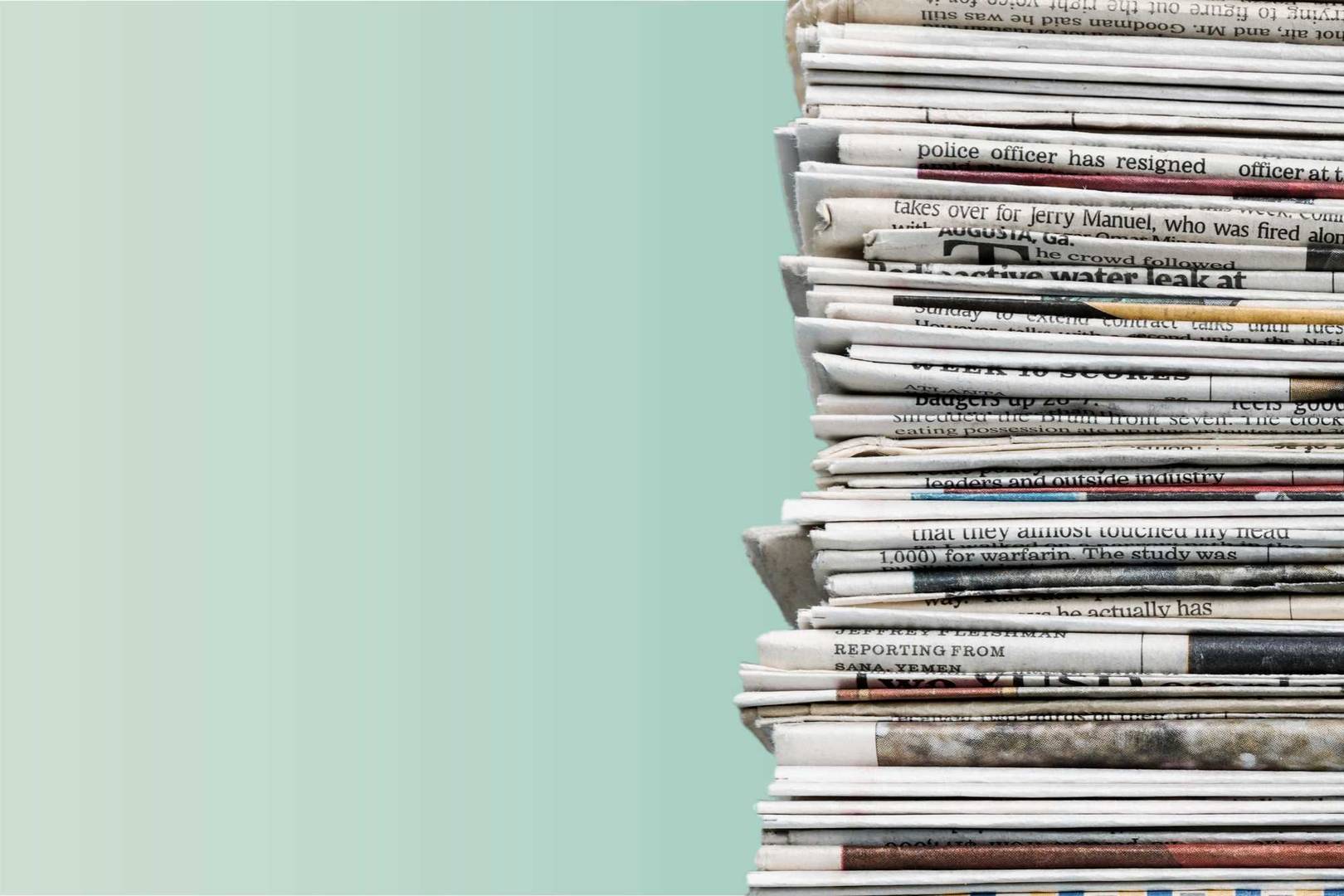 All cyanide compounds contain the C≡N or cyano group, and can take many forms, including free cyanide, simple cyanides, complex metallocyanides, and organic cyanides (nitriles). The cyanide ion (CN-) causes mammalian toxicity by binding with the enzyme cytochrome C oxidase, affecting the central nervous system and heart. Human exposures to as little as 1.5 mg/kg of body weight can cause death. The acute toxicity and widespread industrial usage of cyanide makes environmental testing critical, particularly for mine tailings and effluents from industries that utilize cyanide.

Cyanide is well known for its use in the metal mining industry, where sodium cyanide is often used for extraction of precious metals (mainly gold and silver) and some base metals. Tetrasodium ferrocyanide is frequently used in many regions of Canada as an anticaking agent in road salts and may be released to the environment by associated runoff. Cyanides may also be generated incidentally by manufacturing processes that use high temperature and pressure, such as in blast furnaces used by iron and steel manufacturing mills.

Cyanide is regulated because of potential significant impact not only to human health but also to the environment. CCME guidelines exist for free cyanide in both freshwater (aquatic life; 5 µg/L) and soil (0.9 – 8 mg/kg).

Most cyanide analysis involves the selection and use of testing methods that are designed to measure one or more of three empirical categories that encompass the various forms of cyanide compounds that may exist in a sample:

Total Cyanide (TCN) – The sum of some organically bound cyanides, free cyanide ions, complex cyanide compounds and cyanide bound in simple metal cyanides, with the exception of the cyanide bound in gold, cobalt, platinum, ruthenium, and rhodium complexes, which are not fully recovered, and of thiocyanate (ISO 14403-2:2012).

Free cyanide is directly responsible for cyanide’s toxicity and environmental effects, but complexed cyanide species found within the WAD CN and TCN categories can liberate free cyanide with exposure to strong UV light and/or under acidic conditions. 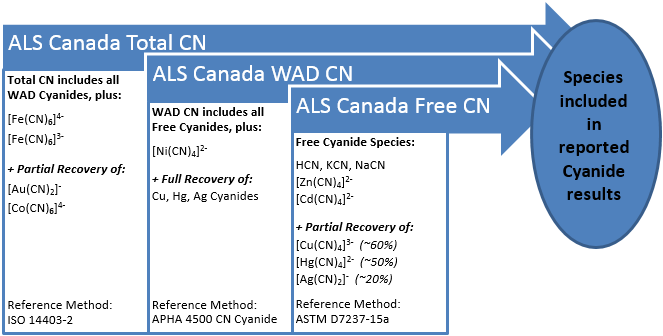 All test methods for Total and WAD cyanide species use reactions induced by some form of chemical and physical treatments to break down complex cyanides into free cyanide ions which can be detected and quantified by colourimetry or other measurement techniques. Classical wet chemical cyanide analysis procedures for these tests are highly prone to interferences due to the severe conditions imposed during manual digestion and distillation.

ALS Canada’s standardized automated cyanide analysis methods utilize Segmented Flow Analysis (SFA) to determine Total Cyanide, WAD Cyanide, and Free Cyanide in waters and soil leachates, and are now used exclusively for all environmental testing of cyanides at all our Canadian labs (excluding some waste classification testing). The ALS Canada method for Total Cyanide (ISO 14403) is particularly advantageous, since it replaces classical manual digestion/distillation (which uses extended heating with strong acids) with on-line UV irradiation to decompose strongly bound metal-cyanide complexes, causing only minimal conversion of SCN to Free Cyanide. The WAD and Free Cyanide methods liberate targeted cyanide species by adjustment of pH to 4.5 and 6.0 respectively. For all three methods, on-line membrane dialysis diverts liberated HCN gas from the sample matrix into a reagent stream for colourimetric measurement, following the same chemistry and principles as classical cyanide methodology. The significant advantages of cyanide analysis by these modern, automated and optimized methods versus classical manual techniques include:

Many sources of interferences can impact most cyanide analysis methods to varying degrees. The ALS Canada cyanide test methods are designed to minimize all common interferences to the greatest extent possible:

Thiocyanate (SCN) – SCN is a common positive interference for all Total Cyanide methods. Thiocyanate is often present (sometimes at high ppm levels) in mining effluents. SCN interference on the ALS Canada ISO 14403 TCN method averages 0.2% – 0.5% conversion to TCN (which means a 10 mg/L SCN concentration can still cause a potential false positive for TCN of 0.020 - 0.050 mg/L). Other TCN test methods (including the classical sulfuric acid distillation method) can generate far greater interferences from SCN. This highlights the importance of understanding the potential impact of SCN concentrations in your samples when testing for cyanide.

Nitrate (NO3) – High Nitrate can enhance conversion of SCN to CN- in Total Cyanide methods, but does not cause false positives on any of the ALS Canada CN methods (all CN species measure < 0.001 mg/L at 20 mg/L NO3).

Oxidizing agents (e.g. Chlorine, Peroxide) – Strong oxidizing agents can decompose most WAD CN species. Samples containing free chlorine or other oxidants should be treated with sodium thiosulfate or sodium borohydride in the field.

Sulfide (S2-) – High Sulfide can cause either positive or negative interferences for cyanide methods. Even at 50 mg/L, Sulfide causes no positive interferences for any of the ALS Canada CN methods (all species < 0.001 mg/L). However, under basic conditions (i.e. after NaOH preservation), Sulfide in samples can convert Free Cyanides to SCN (causing false negatives or low bias). ALS can provide a field treatment kit to remove Sulfide at time of sampling.

Ultra Violet light – Avoid exposure of samples to UV light, which can decompose many cyanide complexes to Free Cyanide. ALS Canada provides our clients with opaque (black) sample containers to eliminate this issue.

A follow-up Enviromail will describe best practice field sampling techniques to reduce or eliminate interferences from sulfide or oxidizing agents at the time of sampling.

As an illustration of the effectiveness of the ALS Canada cyanide methods, we refer to a 2013 study by the Canadian Association for Laboratory Accreditation (CALA). CALA issued a blind “Challenge Matrix” Proficiency Test (PT) sample, for analysis by all CALA labs accredited for Total Cyanide analysis. The challenge sample contained high levels of known TCN interferences (particularly thiocyanate), prepared as per ASTM D7365-09.

The challenge sample did not contain Cyanide. According to ISO 14403, ≤1% of Thiocyanate should be converted to CN in Total Cyanide methods, if correctly optimized. In addition to SCN, the challenge matrix includes other interferences that enhance SCN degradation. More than half of 51 Canadian laboratories accredited by CALA for TCN reported false positives that exceeded the 1% SCN conversion expectation of the study (all results to the right of the red line). All ALS Canada challenge sample results by our optimized ISO 14403 TCN method met the study objective (averaging <0.5% SCN conversion to TCN), as shown in the graphic below.

Most of the common interferences for cyanide test methods are rarely encountered in typical environmental samples (with the exception of mining effluents); however, with a good understanding of the interferences that can potentially occur with cyanide analysis, environmental practitioners can proactively avoid unexpected data quality issues, and will know when to contact the laboratory for guidance to handle complex or challenging sample types.